Unfortunately we have two issues in our latest iOS app, version 2.0.11.

We have submitted a new version to App Store, but nowadays it takes about a week before Apple reviews apps so the update will take some time to reach you.

Workaround if already updated to 2.0.11

Before the new version that fixes this issue (2.0.12) is available you need to do the following when reporting or releasing messages: 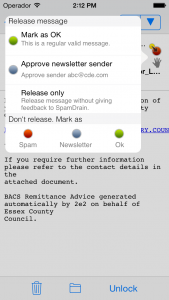 The second issue is that message lists won’t show any messages if you have your clock set to 12 hours instead of 24 hours. The workaround for this is to go to your Settings app, General->Date & Time and switch 24 hour on. Then lists will show messages again. Version 2.0.12 will include a fix for this as well.

We are very sorry for the inconvenience and hope the new version will be available a soon as possible.